Granulisina, the hopeful “projectile” against cancer created by Spanish scientists 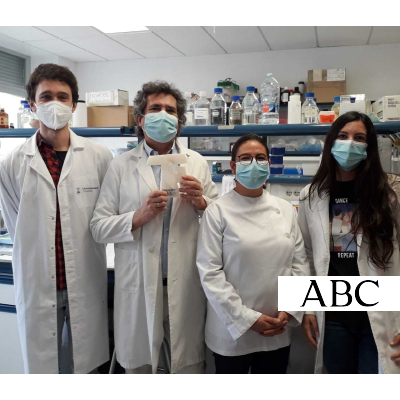 The research, led by the University of Zaragoza, advances in the clinical use of a human antitumor protein combined with antibodies.

Its efficacy has already been proven in mice, in colon and gastric tumors.

A human protein, granulysin, combined with antibodies that act against tumor components. This combination (immunotoxin) is the new hope against cancer that Spanish scientists and investors have developed. It has already proven its effectiveness in mice, in colon and gastric tumors. After these successful trials, the research currently faces two key stages: on the one hand, advancing in the laborious phases of preclinical evaluation that lead to the decisive experimentation in humans; and, on the other hand, to continue analyzing the efficacy that this novel immunotoxin may have in other types of cancer, in addition to colon and gastric cancer, in which it has already been seen to work in animal models.

This immunotoxin is based on granulisin, a human protein activated in our lymphocytes and which has antitumor efficacy. Among other advantages, granulisin offers two particularly valuable ones, according to the researcher leading this project, Alberto Anel, director of the Chair of Molecular and Cellular Biology at the University of Zaragoza. On the one hand, as it is a human protein, it is safe from our immune system to be able to reach and attack the tumor without interference, something that is not so easy for bacterial-based immunotoxins. On the other hand, when combined with an antibody that recognizes components that are only in the tumor, this cancer treatment would be extremely precise to exclusively attack malignant cells and reduce side effects.

The research project led by Alberto Anel is carried out by the Spanish biotechnology company Peaches Biotech, which is financing the multi-million dollar investment that a project of this caliber entails.

The combination of granulysin with antibodies is what is called immunotoxins. They are a kind of “projectiles” against cancer, capable of being singled out for specific tumors. The key is to combine granulisin, in each case, with the ideal antibody that reacts against components of each type of tumor.

This combination is essential, because granulisin, by itself, would not reach the tumor. And it is not feasible to inoculate it directly into tumors, especially those that are less accessible and localized. That is why it is essential that granulysin is transported with the help of the antibody. And, to obtain adequate amounts of granulysin, this human protein is artificially produced in yeast, purified and ready to be applied.

“We have already tested a toxin directed against the carcinoembryonic antigen (CEA) that is only expressed in colon and gastric tumors”, explains Alberto Anel. “And we are conducting preclinical research in animals with other immunotoxins that recognize components of other types of tumors, to see if they are also effective in targeting granulysin against those other tumors. If they work, we will have various immunotoxins; otherwise, at least, we will have one that in animal models we already know works against colon and gastric tumors”, he points out.

The work that lies ahead

“The plan that we have designed with Peaches Biotech sets the goal of completing the preclinical experimentation in September 2021,” explains this researcher from the University of Zaragoza. If the results are adequate, as of June Peaches Biotech could begin preparing the first phase of human experimentation, “which could begin in early 2022 and extend until the end of 2024.” In other words, four years of research ahead -and a multimillion-dollar investment– to be able to confirm if this new finding fits into regulated cancer treatment.

The research project on the oncological immunotoxin based on granulysin has already been awarded in Aragon for its innovative nature and for the expectations it entails in the field of cancer treatments. Specifically, it has recently received the Triple Helix Award, an important recognition that the University of Zaragoza grants to scientific projects that are licensed to companies.